Last night I tried a new experiment – a super basic one, but something I’ve never done before. I’ve been collecting the ‘ends’ of vegetables when I cook (when I remember) since the end of July, when I came across instructions for it, planning to do this.

I don’t really use vegetable stock for much (usually I use chicken or beef broth in soups) but there is one particular recipe I do, and I have always bought stock for it, of course. This seemed like it might be a delicious alternative and – hey, I’m throwing away those ends anyway now, I may as well at least try it and see how it works out!

Not so much a ‘recipe’ proper, but here’s the basics. END_OF_DOCUMENT_TOKEN_TO_BE_REPLACED

I created this recipe – by which I mean I literally threw it together mostly as I went along, starting about an hour and a half ago. I’m writing up this post while I sit here devouring a bowl of the deliciousness.

I had a hunk of beef (london broil) in my fridge which was originally meant for other things, then as of yesterday when I realised I wasn’t up to cooking it (I’ve somehow injured my shoulder; basic things are a bit tricky right now) for the freezer. It never made it there, I realised this morning, so I improvised dinner out of it.

This is a ‘liquidy’ style soup, which tend not to be my favourite (partly because the broth is often thin or flavourless) but this one is wonderful, with a nice rich liquid that isn’t too much. It was also, aside from chopping everything for it, really easy to throw it together.

It’s proving a good meal to round off the end of a rather stressful day. The end of the ‘doing’ stressful, anyway – I’m currently waiting for a storm to hit and hoping it isn’t too bad of one.

END_OF_DOCUMENT_TOKEN_TO_BE_REPLACED

This recipe is actually one that my mother was very fond of – she discovered it when I was a kid, and made it fairly often, in the process making it her own. My version here has been tweaked a bit further even from hers, which was fairly drastically altered from the original (the origins of which I have no idea). 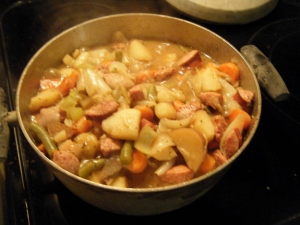 Kielbasa Stew, all ready to eat!

This is a nice thick stew that sort of blurs the sometimes-difficult-to-determine line between soup and stew, and it makes somewhere around eight rather hearty servings. (So if you, like me, are often feeding only yourself, you might want to freeze some of it for later. Unless you like it enough to eat it frequently for the next week – no judging from me; I do that with a couple of my favourite dinner recipes.) It does freeze and reheat well, fortunately, if you want to take that route.